Getting Around Orlando - Guide to Public Transportation

Orlando is big. 67 square miles, Big!. A visit to Orlando should involve a plan on how you're going to get around the city. Despite its huge size, as you plan your Orlando vacation or convention, figuring out how to get around is one detail that should not make you nervous.

Getting around Orlando isn't as difficult as you might think. There are several ways to get around Orlando and get you right to the attractions you want to see.

Orlando fortunately was planned as a car-friendly city, making driving the easiest way to get around. Just avoid the long morning and evening rush hour periods and you'll be fine. Interstate 4 (I-4) which runs East and West, provides access to all of Orlando's theme parks as well as nearly all of Orlando's toll roads, including Florida's Turnpike.

Whether you are a Florida local, or one of the millions of tourists that come to "Orlando, the City Beautiful", our goal at TripsOrlando.com is to help you find the fastest and least expensive way to navigate this wonderful city.

LYNX, is Central Florida's bus system, and provides economical and dependable public transportation in the Greater Orlando area. LYNX bus stops are marked with a pink "paw" print of a Lynx cat.

Shuttle vans and buses operated by off-airport companies are a popular and convenient transportation option in Orlando, especially from Orlando Airport to your hotel.

Find out where to rent a car from the start so you can see the rest of Orlando.

There's no shortage of taxis in Orlando. Learn where to go to get a taxi to your favorite Orlando attraction. 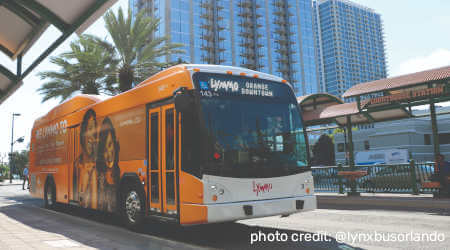 LYMMO is a free circulator bus in downtown Orlando. With 21 stops, LYMMO is guaranteed to get you close to your downtown destination for FREE

Driving in Florida can be relatively straightforward, provided you follow some of these simple rules.

How do I travel

Driving Times from Orlando FL. to